From Bay of Plenty 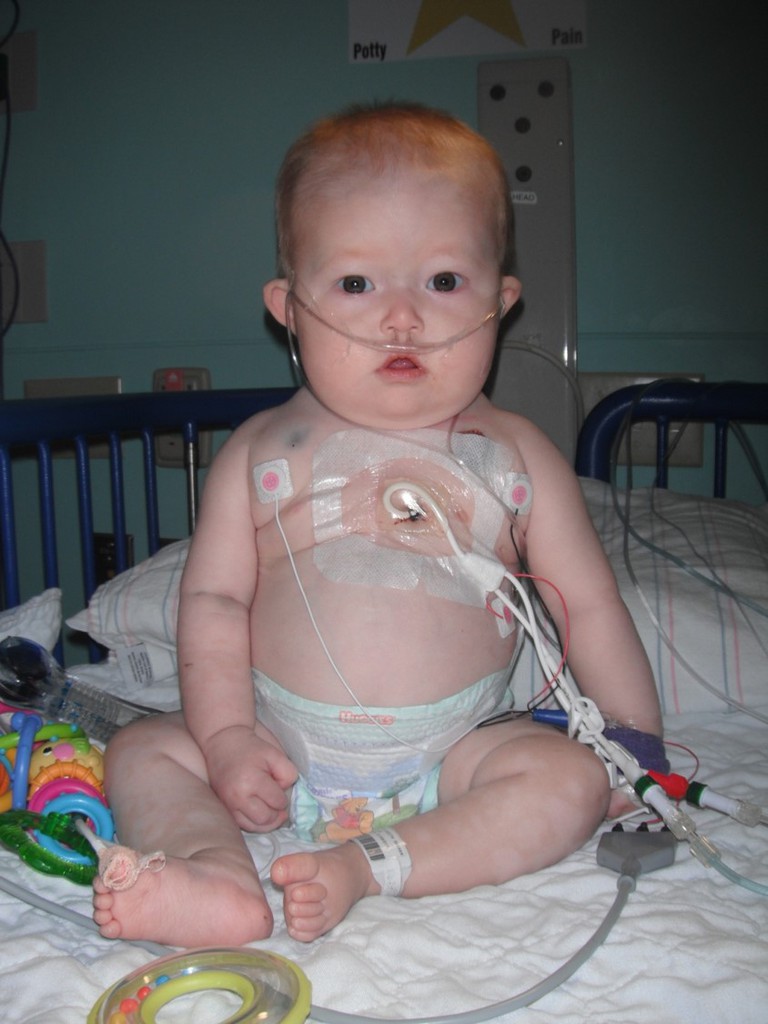 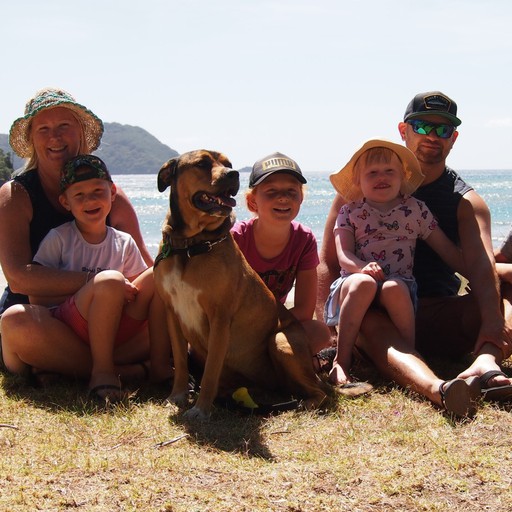 At the time of Zoe’s birth, we were a family of five living in Whakatane. We are now a family of six – my husband Tamati, and our children Kyan 11, Talia 10, Zoe 8 and Dylan 5.

Our first indication that Zoe was going to have some medical issues was when we had our 20 week scan antenatally, it showed she had some cardiac issues that would more than likely need to be repaired at some stage down the track but other than that everything else looked “normal”. As a result of this scan we were given the option to go on and have some genetic testing carried out to see if the cardiac issue was related to any known syndromes. At this point in time we agreed and the amnio results showed the chromosomal abnormality Q22.11 deletion or DiGeorge syndrome that we have come to learn a whole lot about over the following years.

As a result of this pre-birth news we were told it would be safest to deliver the baby in Hamilton, so a week before the due date we packed up our family and went to stay with my mum to await the arrival of our baby girl. Besides the anxiety of expecting a child with a heart defect the birth was very normal and three days later after a few additional tests we were released from hospital and given the ok to head home to Whakatane.

We managed to get a week at home before life started to give us a glimpse of the challenges of what we were about to face. Zoe was 11 days old when the midwife noticed her colour wasn’t quite right, so she sent us into the local hospital to be checked out. We didn’t leave hospital for another three weeks, as we were quickly transferred to Starship as Zoe was in severe cardiac failure. Her heart had a dismal 25% output and this was the first of many times we were told there was basically nothing that could be done to help her as she was so small and weak and they didn’t believe she would survive surgery. Fortunately, they agreed they could at least try and four hours after we handed her over to the surgical team, we got the call to say she did extremely well and wasn’t requiring the additional support they were expecting she would require.

However, this was the point in time that we were to be introduced to the Starship Immunology team, as previous blood tests showed very low numbers of T cells and the surgical team confirmed they did not locate the thymus gland during the surgery. All evidence was pointing to a diagnosis of Complete DiGeorge, which basically means Zoe had no functioning immune system.

After being discharged from the cardiac ward we returned to Whakatane with the new challenge of juggling two pre-school aged children, while trying to keep Zoe isolated from potential infections. As Tamati was a shift worker and we didn’t have any family close by that were able to help us with the older kids, we decided that even though the risk was large we would still send them to pre-school to give them some normality and I was able to try and juggle frequent hospital appointments around them.

It was in these early days that we were introduced to the Immune Deficiency Foundation through the Immunology team at Starship. Not only were we visiting the local hospital at least twice a week, we were driving to Starship once a month, if not more, for monitoring as well as being taught how to administer weekly antibodies via needles. It was a huge lifestyle change for two dairy industry workers! The parking and café vouchers we gratefully received from IDFNZ at this time were always a huge help when having to travel so far from home.

At three months old we were told that Duke Children’s Hospital in North Carolina would accept Zoe as a patient for their thymus transplant programme; but we would end up having to wait until Zoe was eight months old before we could head over as the transplant is considered experimental and there were issues with the FDA approving paperwork. I believe Zoe was about the 60th patient to have the transplant internationally, and only the second from New Zealand at the time. The build up to getting over to America did start taking a toll on Zoe’s health so a lot more nights were spent away from home.

When Zoe was considered medically stable enough to travel commercially, we were able to start planning for our family’s journey over to the United States. Initial estimates would be that we would need to be there for three months and we were fortunate enough to fundraise enough money to bring our whole family over to be with Zoe and me. It was also at this time we were very generously gifted a return airfare from IDFNZ so I was able to have the support of my mother when Zoe and I travelled over to get settled and assessed on our arrival at Duke.  As you can imagine it is quite the circus travelling with a medically dependant 8-month-old, and that second pair of hands was invaluable.

After six weeks of being in North Carolina, we finally found a suitable match for the thymus transplant to take place, and as I’m sure some of you are aware, very rarely do things go smoothly. Pre-transplant was a little rough but there was more to come. We were about three weeks out from being given the okay to head back to NZ when Zoe became really unwell. The doctors basically told us that the virus she had contracted was very likely going to be the end of her as her own immune system was not yet functioning and her body would not be able to clear it. There was talk of sending us to New York for more experimental treatments but by some strange stroke of luck the maternal cells which had for so long being causing problems to Zoe figured out that the virus was an intruder and managed to fight it off to a level where Zoe became stable again. Unbelievably, in the week before we were finally given the okay to head home, Zoe picked up the Noro virus so as we waved goodbye to Tamati and the kids we were left wondering how much longer we would have to remain in the United States. But given that our visa was just days away from expiring the doctors decided that we should be okay to travel. So, after six months we were finally heading home with the hopes of a successful transplant in the very near future.

After returning to New Zealand we were back in isolation and playing the waiting game for the naive T-cells we desperately wanted, typically we were told it takes 3-6 months. Unfortunately, Zoe’s body came under attack from itself and she became desperately ill. Once again IDFNZ were there to support us through a very challenging time when it became obvious that this was not going to be a short stay at Starship. We decided to be together as a family with Zoe as she was so fragile, we were at times living hour by hour. In amongst all the medical procedures there was a time when they were able to biopsy the transplanted thymus tissue and we were given the devastating news that it appeared to have all been destroyed and Zoe was unlikely to recover.  We tried to give Zoe all the “normal” childhood experiences we could, and this was definitely ramped-up once we were told there was nothing else that could be done to help her.

And then oddly enough around this time, we started noticing small but definite improvements in her health…and 11 months after being admitted, after far too many procedures to even remember...we were finally getting ready for discharge home.

At home our newly acquired nursing skills were put to good use. Still suffering from a gut which had been very near to destroyed by Graft vs Host disease, Zoe was intravenously fed for close to a year. All the while still not having an immune system. When it appeared the transplanted thymus tissue had been destroyed we searched for a bone marrow/stem cell match with no luck. We also collected Dylan’s stem cells in the hope he was a possible match, but it wasn’t the case.

Finally, good news...amazingly on her 3rd birthday we got a call to say her blood showed “loads” of the longed-for naive T-cells.

Her new immune system meant she could now begin to socialise, opening-up a whole new world for Zoe. Every year Zoe gets stronger and we spend less time in the hospitals, we even managed to get discharged from quite a few departments. We are now able to come along as a family to the IDFNZ/KIDS Foundation Christmas parties, instead of just mum or dad and the other kids. Zoe is now in year four attending a local school along with all her siblings.  She loves to attend a weekly hip hop class and is a really happy 8-year old growing up so quickly now.  We even survived our most recent blood tests without any kicking or screaming!

Just to finish off, one of the things that someone once said to me when things were pretty rough with Zoe that I always remember is “My child can’t read or write so they aren’t going to follow the book”. For me this rings so true time after time. So many times we were told this could be the end for Zoe, but she keeps defying the odds. I hope this gives some encouragement to those of you who may still be going through the hard days.