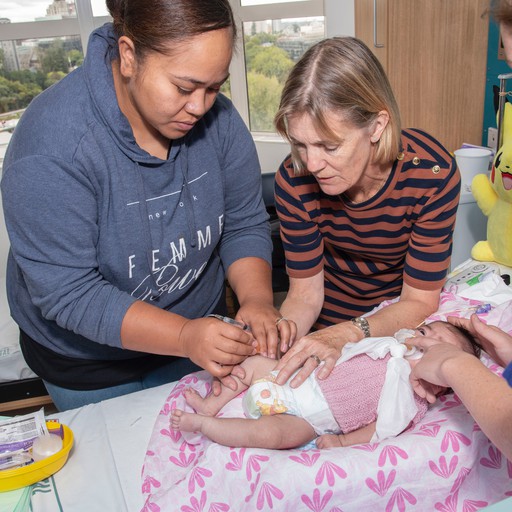 Zani  was only a few months old when she started to break records. Evogam is a life-saving SCIg therapy derived from donated plasma. Zani has become the youngest New Zealander to use Evogam. She is also the only New Zealander to have a bone marrow transplant in the neonatal unit. And finally, but perhaps most impressive of all, Zani was a month premature and with how the dates of her transplant lined up to her original due date, she was transplanted before she was meant to be born.

To be told your baby has a heart defect is news no parent wants to hear, but then to learn that it is the symptom of another illness completely, is gut-wrenching. This was how Zani Tolu’s story began.

Born in December of last year, Zani already had a diagnosis of Tetralogy of Fallot (TOF) which causes oxygen-poor blood to flow out of the heart and to the rest of the body. Zani’s parents had been excitedly awaiting the birth of their youngest when Horizon Scanning – the medical establishment where Zani’s mum Malia had been going for her scans referred them for a specialist scan after the 20-week mark. Unfortunately, Malia and her husband weren’t told that there was the possibility that anything was wrong with their baby and had a follow up at about 23 weeks. It was after this scan that they were told they were being referred to a specialist in Auckland. Again, they weren’t told if anything was wrong and just assumed that the baby was laying in the wrong position and therefore, they needed another opinion.

The Tolu’s midwife confirmed that there was a problem with the baby’s heart, a hole had been seen on the scan. Understandably the family was shocked. Another appointment was scheduled and Malia went alone not knowing the news that would follow. After her scan she was called into another room and sat down with a group of specialists. These medical professionals were able to explain exactly how severe Zani’s condition was and was show what exactly was wrong with her daughter’s heart. Scared and justifiably upset, the tears came then for Malia. She was both overwhelmed by the knowledge and anxious for the health of her little baby who was yet to be born. Zani had a heart murmur (a hole in her heart) and a narrow pulmonary artery on the left side of her heart.

The family was given the option of an amniotic fluid test to also check for Down Syndrome but declined knowing that it could induce early labour which would be dangerous for a baby with Zani’s problems, and that even if she had Downs they would not choose to abort. The Tolu family wanted to leave it to God’s hands.

At 32 weeks Malia was booked in for another scan but was seen by a doctor at 30 weeks. Even with these scans it was hard to tell if Zani would need surgery after she was born.

Malia had a mother’s instinct and as December neared, she knew that she would give birth sooner rather than later. On the 15th she also had a gut feeling that it was the day she would give birth, although her husband didn’t believe her. As Zani and her family already had her diagnosis, they knew they had to go to Auckland Hospital for Malia to give birth. As her contractions started the experienced parents rang their midwife to get her advice on whether they should leave right away for the hospital and were told in no uncertain terms that they should. Malia had a very fast labour and only an hour or so after arriving in Auckland Hospital and being admitted, Zani was born.

The little girl was taken to NICU right away to be monitored and looked after. Her family was asked if they wanted to do a genetics test by the Immunology team. As there was no history of any heart defects in their family, they agreed. On Christmas Eve they were told to come in for a meeting. The diagnosis of DiGeorge Syndrome was confirmed. The doctors explained that the body is made up of 46 chromosomes with half coming from the mum and half coming through the dad. Zani is missing her 22nd chromosome. DiGeorge affects the thymus gland which controls the immune system and in Zani’s case her thymus gland is missing completely which is very rare. With no thymus cells to help fight infection and viruses she was very fragile and susceptible to catching illnesses.

NICU has three levels to organise its patients; Level 1, 2, and 3. Level 1 is moderate, Level 2 is serious, and Level 3 is critical. Zani was moved from a Level 2 case to a Level 3 case after her DiGeorge diagnosis and was isolated. Christmas Night Zani crashed just before 12am and her parents were told that she was stabilised but must have caught something. She was on a ventilator and brain monitor with wires everywhere. Her mother remembers that everything wasn’t great at the time but that they had great support from the hospital staff. They were also told by the medical staff that they needed to prepare for the worst. And so, Zani’s family arranged for her to be baptized by their priest. Although the news was upsetting, they knew that it was the reality of the condition their baby girl was in. The priest came in and blessed and baptised Zani and her aunt was her godmother.

After that day Zani started to rally and after two and a half months in NICU she was transferred to Starship. Unfortunately, Zani wasn’t out of the woods yet. She started bottle feeding and seemed to be thriving until her mother noticed that she would have what everyone thought was just reflux but what Malia described as seizures. Her body would stiffen, her eyes would roll side to side and back and her lip or eye would twitch and her eyebrow would lift. Sometimes this would happen to only one side of her body, but other times it would be both sides. The doctors didn’t think it could be seizures but with evidence recorded on Malia’s phone, Zani was taken for testing. Everything seemed to be normal but her neurological tests showed signs of seizures and yet more medication was added to her over thirteen different medicines to help control the seizures. Thankfully they have seemed to lessen and all but disappear.

Because Zani’s body cannot fight infections, the decision was made that she needed a bone marrow transplant. As the source of all the medical illnesses she suffers, the DiGeorge was the doctors’ priority to deal with first. Zani’s family was tested and she had two matches; her 2-year-old sister and her 12-year-old sister. The decision was made to go with her 12-year-old sister’s marrow. She was happy to do the procedure and even joked that she would be able to tease Zani that she owes her now that she has given her bone marrow to help her get better.

The procedure was done at the same time with the marrow taken from her sister and then administered to Zani right away. Her T-cells (thymus cells) numbered in the 700s when the transplant was completed and dropped to 200 or so a week later but it has helped her immensely. Although there is a possibility of Graft vs Host at any time of her life from now on, Zani has the opportunity to thrive now. She has the expertise of many different teams in Starship looking after her, from Neurology and cardiac to haematology and the immunology team.

There is still a long road for Zani to travel. Fluid was found around her lungs in February and she was put on diuretics to help the situation. She is also on a high caloric formula to build up her weight. Swallowing issues are also another step Zani has to overcome.

Recently Zani’s seizures returned; this time they were more intense with her arms stiff and hands clenched as well as rigid limbs and body and her eyes rolling back. The doctors increased her calcium which helped for about a day or so.

A couple days later, Zani’s seizures had returned, but seemed to have gotten worse. The seizures looked as if they affected her left side more than her right. Unfortunately, the seizure caused her heart to stop and the doctors and nurses rushed into her hospital room to try and revive her. Her family were in shock and could only hope and pray that their little girl would be alright. Her mum recalls the terror and heartache in watching the medical personnel try and revive her baby girl. Miraculously, Zani’s heart started beating once more thanks to the fast actions of the medical staff caring for her. Zani was intubated and given medication to help stabilize her before being taken to PICU. Once there, Zani was given the best care and even though her tests came back negative for any infection or other cause for her deterioration, she picked up again. Her breathing tube was removed a few days later.

However, with immunoglobulins being administered and being in Starship, Zani has the best help to keep fighting. Although its been such a rollercoaster, Malia and her family just want Zani to keep progressing and growing, to keep fighting.  They are so grateful for all the help they have received and credit PICU, NICU and Starship staff for the amazing effort they have put into helping Zani. They know that Zani is being given the best care, is safe and in the hands of the medical professionals has the best chance at life that they could ask for. The family also wants to thank IDFNZ KIDS Foundation as they have become a part of their family and have provided support through every hurdle they have had to cross. This is their first step in a lifetime of ups and downs, with heart surgery to come next. Malia says they can’t lose her now, they want her to live on and don’t let this keep her from whatever she is going to be. She also says that every day should not be taken for granted and although the family doesn’t know what lies ahead for them and Zani, they lean on God and hope that their baby girl will continue to fight and survive.