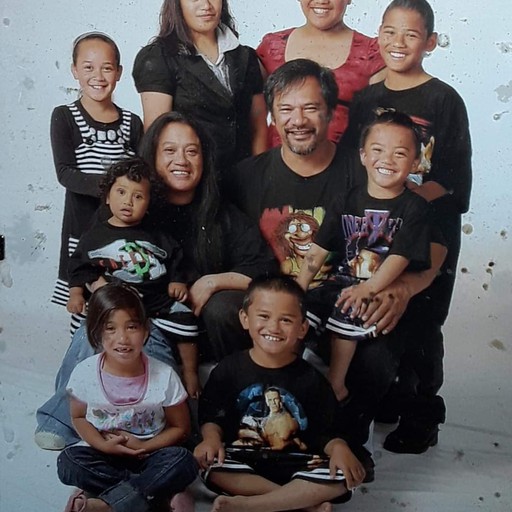 Nothing prepared Jelane and Puke Senior for their youngest child’s dramatic birth. Jelane suffered a cord prolapse and Te Pounamu was born via emergency caesarean section. As Jelane was in surgery, Puke Senior was the first to hear that their new baby had something wrong. When Jelane woke up after surgery the family was told that Te Pounamu had been diagnosed with Biliary Atresia and would need a liver transplant to survive.

Consultation with medical professionals took place and Te Pounamu’s family was told that he needed to be put on the liver transplant list to find a donor match. This didn’t sit well with Puke Senior as his beliefs don’t hold with someone else losing their life to help his son. However, he knew that Te Pounamu deserved every chance at life.

Very quickly the call came that a donor liver match had been found. Unfortunately, as this was a time when swine flu was just hitting the world, the donation wasn’t viable. Just as the family was at the hospital ready to sign all the paperwork which would enable the operation to go ahead, an administrator stopped the proceedings as the hospital had just been informed that a nurse who was assigned to the operation had come into contact with swine flu and had also been in contact with other members of the medical team. The transplant was cancelled and once again Te Pounamu had to wait for another match.

For Te Pounamu’s family it was a scary and stressful time. He was getting sicker by the day and they knew his time was running out; and so, Puke Senior took a chance. Without telling his family, he asked to be tested to see if he would be a donor match for his son. The medical professionals explained that just because Puke Senior was Te Pounamu’s dad, it didn’t mean that he would automatically be a match for Te Pounamu. Still, Puke Senior wanted to go through testing, even with the chance that he might not be a match.

Puke Senior got through the tests and scans easily but felt that some of the questions asked by the psychiatrist were confronting and not helpful or relevant to his family’s situation. Finally, after all the tests and work was done, Puke Senior was told that he was a match for Te Pounamu.

Now was the next step – telling his family that he had secretly been tested to be Te Pounamu’s transplant donor. Puke Senior agreed that telling his wife was the scariest part of the whole process and that he was in trouble for keeping the testing a secret. However, the family were overjoyed that Te Pounamu had another chance to be well.

The transplant surgery was booked, and everything went smoothly. Jelane was worried as she had both her youngest child and husband in surgery but knew that she could trust the doctors to do their best. Because she had other young children to care for, Jelane had to return home while the surgery happened, however she had help from family and friends. As soon as Puke Senior came out of surgery, he wanted to know how Te Pounamu was, that the sacrifice he had made of part of his body was helping his son live.

Amazingly, despite how sick Te Pounamu was, his recovery happened quickly and very smoothly. The little boy was able to thrive and grow, his body accepting the liver his father had gifted him. However, Puke Senior wasn’t so lucky. He endured a lot of pain and still suffers ongoing health issues due to the operation even over ten years later.

Te Pounamu had to be kept very healthy after that as his body got used to his new liver and the house turned into a very clean environment as a result. During this time the family suffered another blow, Jelane and Puke Senior’s third son was involved in a hit and run accident and hospitalized, and the family had to move in and out of hospital as each member recovered and was able to return home.

Medication became a huge part of Te Pounamu’s life. He will be on medication for the rest of his life and it also means that some of his aspirations, such as playing sport, are a little tougher to achieve. At 13 he is now maturing and realizes the gravity of what he went through as a baby. He used to be sad that he was different to other kids his age, but now he realizes the amazing gift his dad gave him, and wants to use it to fulfil his potential and strive for his dreams. Te Pounamu has ADHD and complications from Rheumatic Fever to contend with as well, but he is also a typical teenage boy who loves sport and wants to do everything everyone else can do. He continues to take medication and has to stay as healthy as possible, but his family now have the wonderful gift of watching him grow up and enjoy life.

Puke Senior says that he would do the same in a heartbeat, despite all that it has done to his health. His son is alive now because of his sacrifice and the love of his family. Te Pounamu now has to live with the dad jokes of Puke Senior needing his liver back. The family is blessed with being able to stay together and watch their youngest member grow healthy and strong.