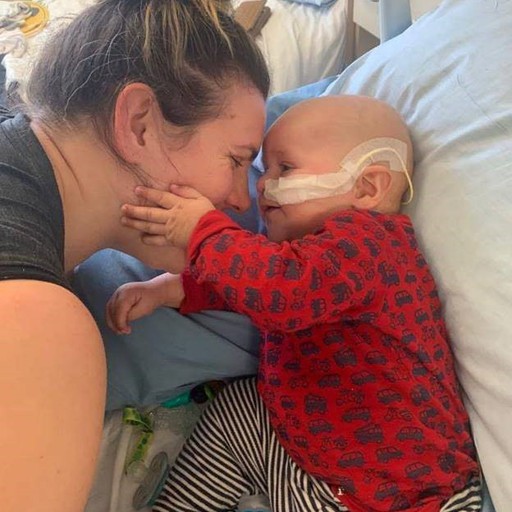 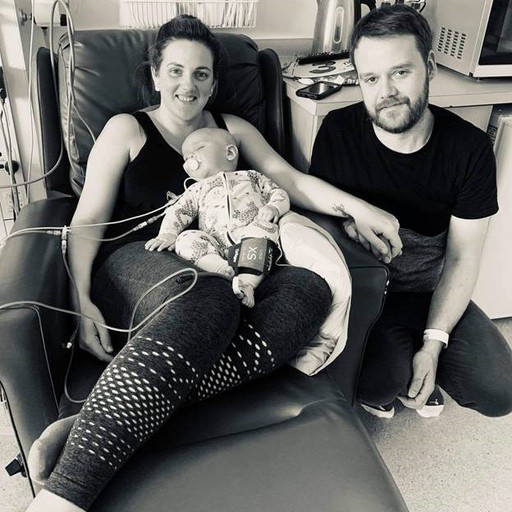 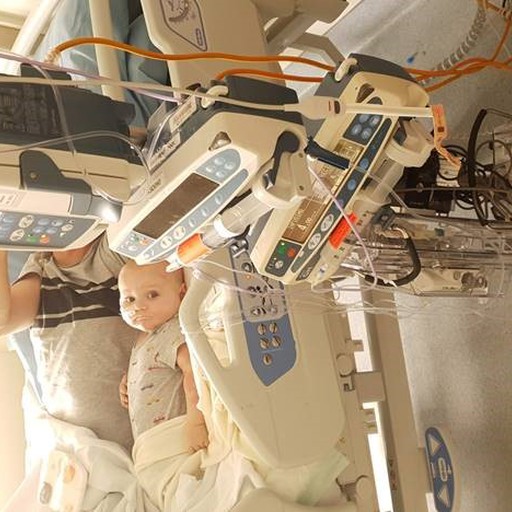 Max Murchison’s parents Liz and Nick were overjoyed when their little boy was born in Sept 2019. Despite the complications Liz had during the birth and still suffers from, Max seemed to be healthy, happy little boy.

On Max’s first day in the hospital he showed signs of petechiae on his skin – pinpoint bleeding into the skin – something which his parents thought was just freckles. Unfortunately, babies aren’t born with freckles and his parents didn’t know that this was a clue as to what would become a life-threatening illness. His blood test tested showed lower than average platelets at a count of 45 but the health professionals believed this was simply because Liz had also had low platelets when she was tested for an epidural during Max’s birth.

Due to Max’s low platelets the doctors thought he had a lung infection and began antibiotics. However, because they jumped from 45 to 55 quite suddenly and this was encouraging, mum and baby were discharged.

Not convinced Max was improving, Liz took Max to their GP Dr Andrew McGuire. With a simple visual of Max in his capsule, it was evident something was not right and a referral was made to Christchurch’s Children’s Acute Assessment Unit (CAA). The family were advised this may take a few weeks.

Liz still suffered complications from the birth, and during an admission in hospital because of these complications, a nurse noticed Max’s petechiae on his neck and face which hadn’t disappeared. The family was sent to the CAA for further testing. Max’s platelets were not improving as expected. His count was 33 – a low normal is 150. It was briefly mentioned Max may have had some of Liz’s antibodies fighting the platelets and to wait it out.  The only way to monitor this was weekly blood tests.

At three weeks old Max was going to the Christchurch Day Clinic for regular blood tests. At five weeks old, one of these blood tests showed that Max’s platelet count had dropped to the 17. To combat this drop Max needed a platelet transfusion immediately. Upset, Liz called Nick worried about their little boy. The Pediatrician suggested Max might have Thrombocytopenia or ITP, which is rare but which usually sorts itself out.

These transfusions became a weekly occurrence as Max’s platelets continued to drop and the transfusions had to become more regular. Nick and Liz became very frustrated as they had no answers as to why their baby was sick. Finally, they were sent to Dr Siobhan Cross. Genetic testing was discussed and the blood test was taken when Max was 8 weeks old.

They continued with the platelet transfusions and blood tests, unfortunately it became harder and harder to find veins and insert lines for these tests and transfusions. The longer Max was sick the more frustrated his parents became as answers weren’t coming. Finally, in early December 2019, the genetic testing came through and Max was diagnosed with Wiskott-Aldrich syndrome, an inherited immune deficiency syndrome which causes low platelet count, auto-immune diseases, infections, eczema and some types of cancer. This meant that the platelet transfusions had to be stopped as they could cause Max’s body to produce antibodies to the platelets.

Sadly, although Max now had a diagnosis, because the illness is so rare, no one knew what it was and Max’s family couldn’t find much information about it. His family seemed to be on their own. Liz spent hours and hours researching WAS and joined the IDFNZ. Janet was in touch promptly with a very detailed information pack on immune deficiency disorders.

Less than a week later Max had a small surgery to have double lumen Hickman Line inserted into his chest for easier IV access. This will stay in for the course of his treatment.

Liz was still struggling with complications from Max’s birth and Max was becoming sicker with blood in his poo, bleeding in his eye, and his platelets continuing to drop. As platelets affect clotting and immunity this was a very big worry. Both he and Liz were in and out of hospital adding stress to an already stress-filled time.

In Feb 2020, the family was excited to travel to Auckland’s Starship Children’s Hospital. On the plane ride up, Max was wide awake, smiling and happy the entire way and then once he was admitted into hospital, he was able to start making friends with the nurses, smiling and charming them.

Liz and Nick were able to sit down with Max’s team Dr David DeAmbrosis and Nurse Specialist Nicola Parker and learnt more about his diagnosis. It was hours of meetings meeting other specialists, but they were happy to finally have some answers and information. Amazingly, a 100% donor match was found quite quickly in Germany and the next steps for Max’s transplant were taken.

In March 2020, three weeks later, the family moved their lives to Auckland’s Ronald McDonald House. Social workers set up a lifeline for Liz and Nick. They were put into touch with Tanya Pryde, another mother in the IDFNZ Community with baby Stella who also underwent a BMT. She was able to give them more information about what to bring before they moved up, how the transplant goes and what we should expect mentally.

Time moved quickly then as the family waited for Max to be admitted and begin conditioning. Then suddenly, in the middle of March, the world came to a standstill. Lockdowns across the world threatened Max’s transplant. The German donor was deemed too risky and so Liz and Nick were tested as 50% match donors. Liz was going to be the donor, but genetic testing revealed she is a carrier for the Wiskott-Aldrich gene and so Nick became max’s donor. The next Monday the Prime Minister announced New Zealand would be going into Lockdown in two days’ time.

The medical professionals sat Nick and Liz down and it was decided that Max’s BMT was a priority and would start his chemotherapy and the bone marrow transplant would go ahead even with Lockdown.

Nick started his course of medication which increases his stem cells and pulls them from the marrow to the blood so that he wouldn’t have to undergo an invasive procedure to harvest it.

On day 0, Nick traveled to the Auckland NZ Blood Centre and enough stem cells were taken for Max. He returned back to Starship and the cells were infused via Max’s Hickman Line. Max slept through the whole thing!

The silver lining for the Murchison family was that because of Lockdown Nick was able to stay with his family for longer than planned. This didn’t make everything smooth sailing, however. As the family was unable to leave the hospital things like food became hard to get. It took almost 2 weeks before a Countdown delivery was able to be delivered. Max was very sick and suffered a lot from the chemotherapy. He was in a lot of pain and had terrible fluid retention. He went up two sizes in clothes. Liz was unable to buy any clothes online because online essential clothing was only allowed to be sold, and there were out of stock. He only had clothes because his doctor and a PICU nurse were generous enough to bring him clothing from their own children. The family were on their own which was very hard but luckily, they had an apartment at the Ronald McDonald House and team there ensured meals were saved for them.

Despite the transplant going as well as hoped, post-transplant has been hard on Max. He suffered Graft vs Host in his gut and still suffers the residual effects of that. He continued to catch colds and other small illnesses which put him in and out of hospital. And then, at about seven months old, he seemed to become very tired, something which was unusual for his parents as he had never been a very big sleeper. Despite a bad feeling Nick had to return home to Christchurch to return to work in his business. Liz took a video of Max as she found it hard to explain to his doctors what was happening. Within hours, Max became unresponsive and was taken for an MRI. Nick was called, told he was to return to Auckland immediately. During the lock down there were limited flights, lucky for Nick there was one in 2 hours.

The doctors found swelling in his brain. Thankfully it was reversable. Max’s doctors told her that he was having silent seizures caused by PRES – Posterior Reversible Encephalopathy Syndrome. This was caused by the Graft vs Host drug Cyclosporine. The medication was changed, and he showed signs of improvement straight away. Max needed to stay in PICU for the night – which he loved, a nurse on tap 24/7!

Max is mostly back to his normal self. He has endured a lot of little setbacks but is nearing his ‘golden’ 100 day. The family have been at Ronald McDonald House for 4 months but will be able to go home for a couple nights soon.

Liz and Nick agree they were mentally prepared for the transplant but not for what would follow. The fact that Max’s milestones come later than they should because he has been so sick breaks Liz’s heart. The little family has been through so many highs and lows and dark days, but they can see the finish line now and are racing to get there. Liz and Nick are extremely grateful to all of the family, friends, RMH Staff, IDFNZ team, and all generous donators that have helped them stay afloat throughout this tough time.

Now Max is thriving. He has a favourite stuffed lion toy, is very close to crawling and his personality is starting to show more and more each day.

The Murchisons hope that he will have a normal future, one where he doesn’t have to worry about getting a severe infection every time he leaves the house and that he will not have to undergo another transplant. For now, he has fought and won.