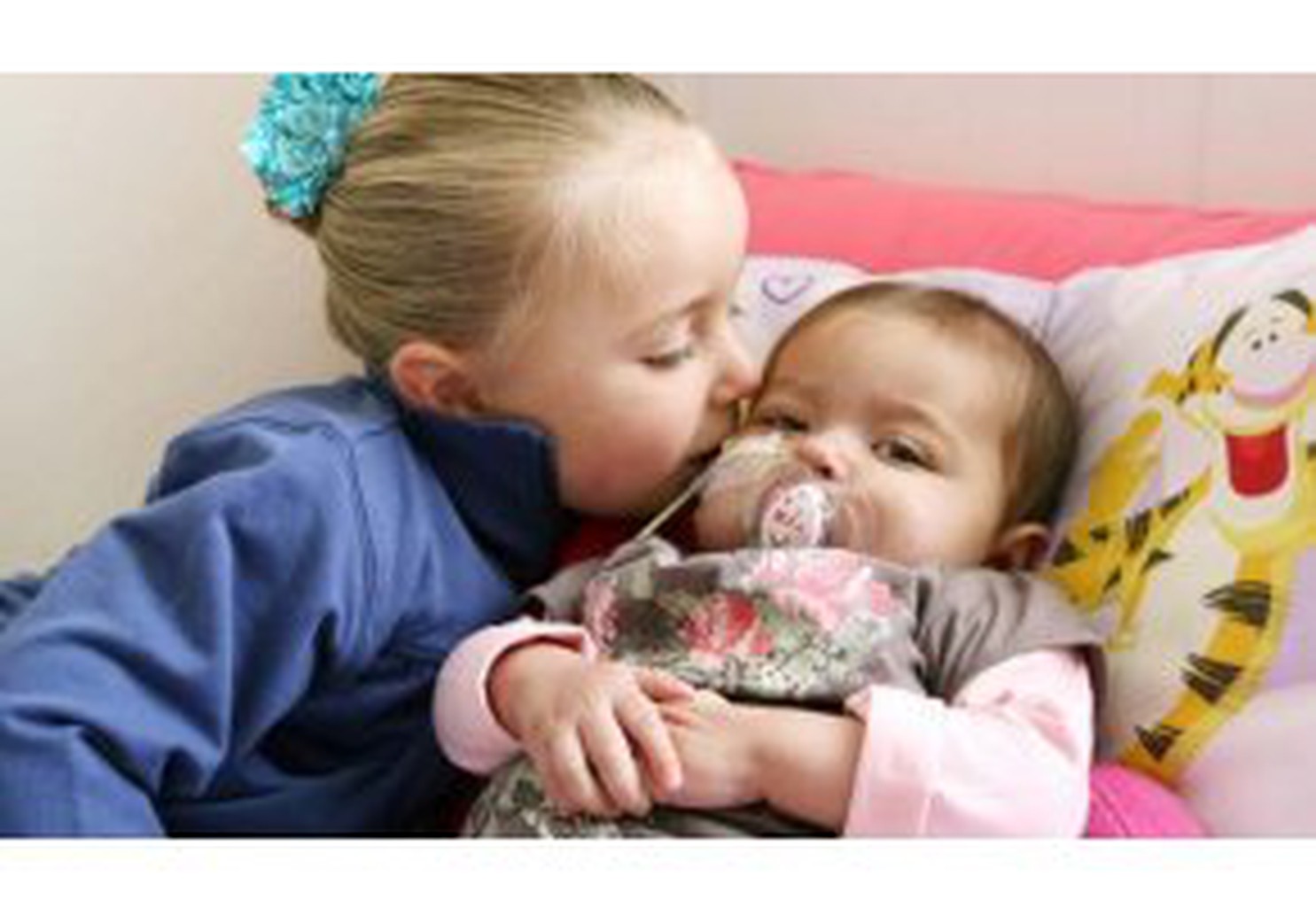 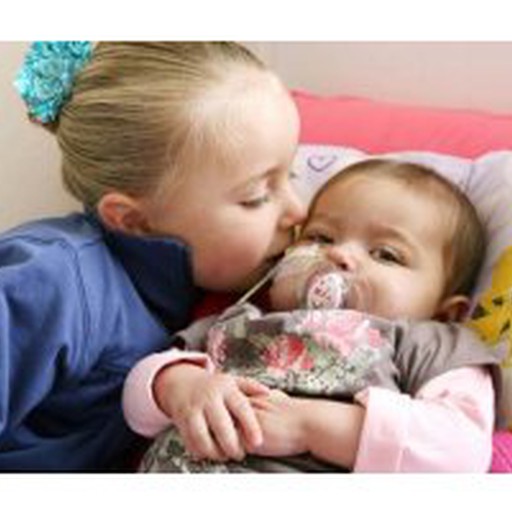 Madison (Madi) was born on 21 January 2011 and was about four weeks old when she became really irritable.

There was just non-stop crying - it seemed like it was 24/7 - so I took her to the doctors but they said it was nothing. She had symptoms that seemed strange to me - her poos had become almost non-stop - every nappy was pooey. She was also throwing up a lot and her milk appeared curdled.

Our instincts told us that she wasn't right. We had Emily, who was 2 ½ when Madi was born, so we knew what was normal and what wasn't. Madi could be well fed, well rested, with a clean nappy and still be screaming for hours.

I called our midwife, even though we'd been discharged from her, as well as going to see the GP and they both gave me lots of advice but after about two weeks I went to A&E because she was just crying and crying. The doctor there said it was colic, so I bought all the colic medication off the shelf but nothing helped.

In the end, we went to Starship. We'd read up all about colic but it just didn't sound right. We saw yet another doctor who said he was 99% sure it was nothing and we could go home, but before we left, he asked another doctor to check us. He was a gastro doctor and his first question was, "How long has she been this yellow?"

We knew she was a bit yellow but because we were with her all day every day she didn't seem that bad to us.

We'd actually taken a stool sample with us to Starship because I was so sure it wasn't right and that was the next thing he asked about. He knew it wasn't right either and ordered a whole lot of other tests. He told us there were a few things it could be and that one of the them was biliary atresia.

We didn't think too much of it, because we had no idea what it was. Then they started explaining it to us and we couldn't believe it - it was our absolute worse case scenario.

When they mentioned that Madi might need a liver transplant, it really hit home that it was serious and not just some virus that would mean a few days in hospital.

We fell to pieces but tried to just keep going - it was just so unreal. Then we started going through the blame process - thinking about all the people who'd told us Madi was fine when she wasn't, and then blaming ourselves too. I had an infection during my third trimester, so I decided it was my fault too. In the end, you just have to let all the blame go - biliary atresia is completely unexplained and blaming people is just a waste of energy, when we needed all our energy for Madi.

She was eight weeks when she had the kasai. She'd had all the blood tests to test for biliary atresia but it wasn't until they opened her up that they were 100% sure that's what it was, so they operated on her there and then.

The surgery went well but over the following weeks her tummy started swelling up, as well as her spleen. She wasn't absorbing anything and she started turning yellow again.

Three months later she was confirmed as a failed kasai and they put her on the transplant list. They tested Dave (Madi's Dad) and within a few days found he was a perfect match, which was incredible as Madi has quite a rare blood type.

He's in the Navy so he was in the best physical condition he'd ever been in and hadn't had a drink for months. We were both happy to be tested, but Dave wanted to go first and we were so excited when he was accepted as Madi's donor.

The next job was to try and build up her weight in preparation for the surgery. She was only 6 ½ kilos and the ideal weight for surgery in 10 kilos so she had a lot of ground to cover. We really focused on trying to feed her up but it was such a challenge because she wouldn't keep food down. She had a nasal gastric food to give her a slow feed all night but as soon as you picked her up in the morning, she would throw up everywhere. We got her up to just over 8 kilos before her transplant on 9 August 2011.

The whole day went to plan - we kept getting news from theatre to say that everything was going really well. Madi was in theatre for about 12-13 hours and Dave was in about 8 hours.

The next day everything was on track but the day after that when we took Madi for her daily ultrasound, I saw there was panic on the sonographer's face. I knew her quite well by then and she just said, "I'm not getting a good reading".

She couldn't see the blood flowing into the liver, which meant Madi was back in theatre to see what was wrong. This time it took 11 hours. The surgeon found a kink in the artery that feeds the liver and he was hopeful he'd fixed it. However, when we went for our scan the next day, they couldn't find the blood flow into the liver again.

They told us they'd done all they could the day before in theatre so we'd just have to wait and see what happened - that they couldn't do any more. They monitored her for the next few days and by this stage Dave was released from hospital so it was great having him back with me. It was such an awful time - her internal organs started failing, she started swelling up with fluid and there was leaking from her wounds.

About 10 days after her transplant, she was re-listed back onto the waiting list, straight to the top for the whole of Australasia. We only had to wait two days for her donor liver but in the mean time she had become so sick that one night the doctors thought we were going to lose her and called us in to say goodbye. The next morning, we got the phone call to say a liver was on its way over from Australia.

It's hard to say which transplant was worse. The first one was awful because it was Madi and Dave, and we didn't know what to expect. With the second transplant, we knew it was her absolute last chance - that if it didn't work, we would lose her. There were just 9 days between them.

It was the hardest time of my life - I don't ever want to feel like that, ever again. We know her donor was only a young person which is very hard to think about. It's really opened up our eyes to being donors - I hope I'm able to help someone when I don't need my organs anymore.

Madi had more complications following the second transplant and these took a while to resolve but she came right eventually. Emily was up at the hospital every day and she loved the Starship environment. She always looked out for Madi - when Madi was having blood tests and was getting upset, Emily would say to the doctors, "Don't hurt my sister!"

Even though we live in outer Auckland, it was still great having a room at Ronald McDonald House so we could be close to Starship - you don't want to be further away than you have to.

We're both from the UK, so feel quite isolated from many of our family and friends back home, but when Madi was due to go in her first transplant, my Dad came over to help out. He was there for the second one too and then when he left my Mum came out to help with Madi's recovery. Big sister Emily was our strength - she helped keep our life normal.

It was hard on all of us - I felt bad that Emily didn't get as much attention as she should have and it was hard taking Madi anywhere. When we went out, she had tubes up her nose and she was yellow and everyone used to stare - it was horrible.

Nearly a year down the track she's still having a few teething problems with her liver and blood results going up and down.

But we're nearly one year on and that's a big deal - making it a year down the track from transplant is a real milestone.

We're lucky that Madi had something wrong with her that was fixable, even if it was a hard journey. Having spent time in Starship, we know there's lots of children worse off and we're so thankful we still have Madi with us, even though she is immuno-depressed and will be on drugs for the rest of her life.

It's been great meeting other biliary atresia and transplant families. One boy that we met in Starship has just gone onto the transplant list now. It's really good having other people who have been through it, both before and after us. They were my support people, just completely understanding what we were going through. They didn't try to give us too much advice, they were just there for us, sharing their stories with me.

Dave was such a rock. We were going to get married after Madi was born but that didn't happen. Instead we finally got married in January at a lovely service at the Devonport Naval Base Chapel.

Our journey has definitely made us stronger as a couple and as a family and we really make the most of every day with our girls.