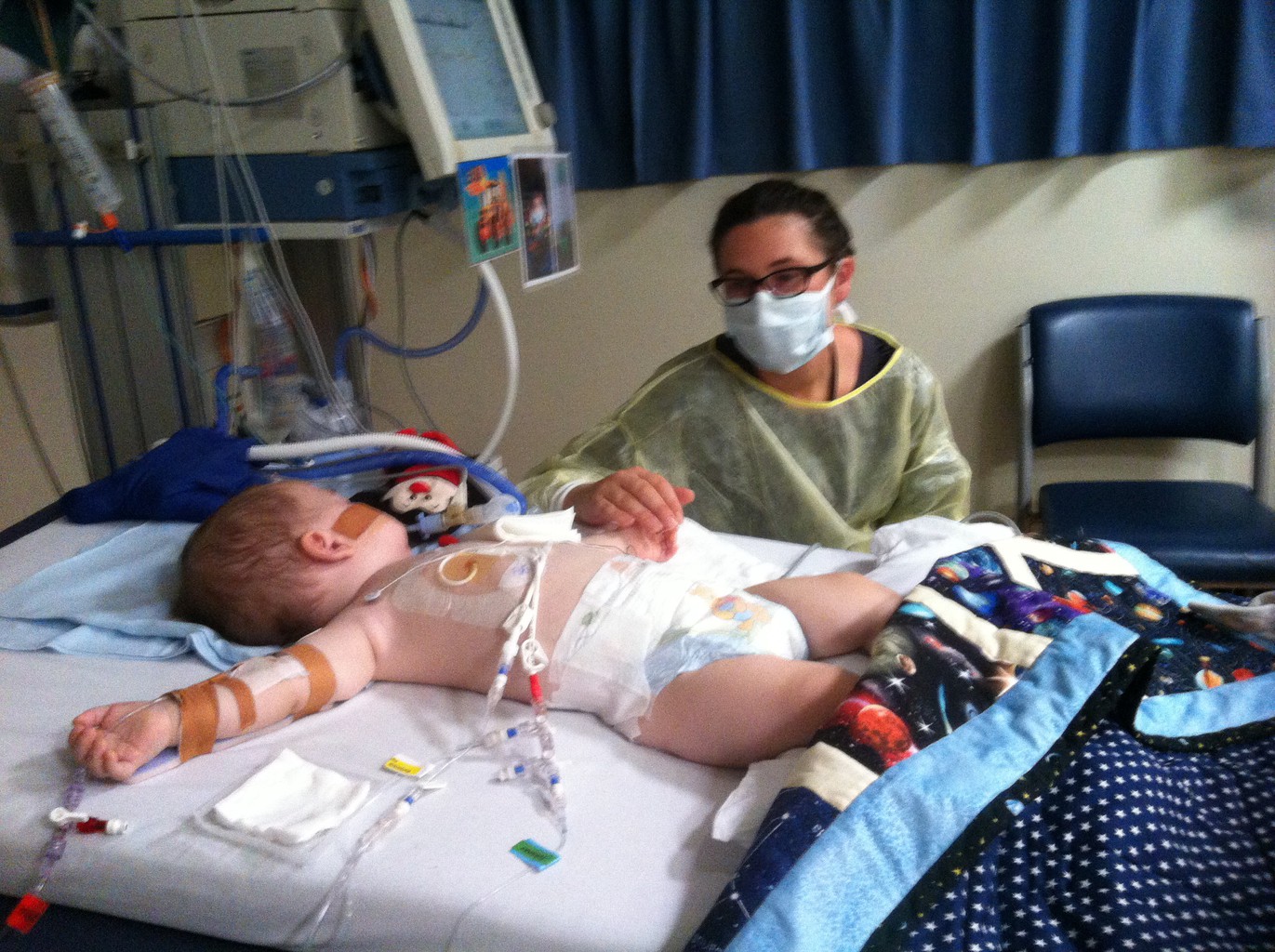 On July 11th 2013 we welcomed our beautiful baby boy Luka Archie into this world weighing a healthy 8 pounds 2 ounces.

In the beginning Luka was just like any other new born baby although he did cry a lot a lot and we would be lucky if he slept an hour at one time. From about 6 weeks old, his crying became worse and he seemed to be in pain. We were told he had colic then reflux he also constantly had thrush. From 3 months old he began to have blood in his stool so then we were told he had a dairy allergy and I needed to stop breast feeding, from that day everything started to go downhill really fast. We had countless visits to our GP and a&e I just knew something wasn’t right, but they would check him over and tell me he was fine and send me on my way.

Early May we were on our 4th stay in hospital for pneumonia but each time they were longer, this time we were on day 14 with no improvement and a high oxygen requirement. We were transferred to Christchurch hospital for further testing, Drs were thinking possible underdeveloped lung or floppy air way.  We never expected the news we were about to be given on May 23rd  2014  we were told Luka had severe combined immunodeficiency (x-linked scid or commonly known as the bubble boy disease.

They told us this was classed as a paediatric emergency and he needed to go to theatre straight away to have a hickman line put in, as all his veins and body were starting to shut down, while he was in there they took a sample from his lungs which revealed he had pneumocystis pneumonia. They explained to us that this is like trying to breathe through concrete.

Luka spent the night in ICU the following day we flew to starship to embark on a lifesaving journey. Luka spent 3.5 weeks on life support fighting several bugs and viruses and had a few complications along the way with infections in his lines and pneumothorax from requiring so much help with his breathing it was such a rollercoaster experience one minute he was doing well the next he was going down again, Drs were concerned they had not had a 10 month old baby presenting with SCID before normally it would be picked up much sooner, but we knew he was strong and could fight this.

On June 12th they started to wake Luka up and I got my first cuddles and giggles, I could not have asked for a better 30th birthday present! From then on everything happened really fast, we were sent up to ward 27b to get ready to start chemo and prepare for a bone marrow transplant.  July 8th he started chemo, July 11th he had his 1st birthday & July 16 he got his transplant! It was still very much a roller coaster ride for the next few months with more infections and complications but on December 18 2014 after 7 months in starship we were finally allowed to go home. He has been doing pretty well since returning home, we still make monthly trips to starship for check-ups as he now has got graft versus host disease of the skin but it is managed with steroid creams and he is still on medication to suppress his immune system but overall he is 100% better than this time last year.

On Saturday we just celebrated his 2nd birthday which is a milestone in itself and this Thursday is one year post transplant. We now have a very happy loving little boy and with time Luka's new immune system will grow stronger and he should be able to resume a normal life. We are so grateful for the second chance he was given, we are so thankful for the doctors and nurses who helped Luka recover, family friends and strangers he supported us and especially grateful to IDFNZ and Janet who gave us an umbrella to fall under, ongoing support and an ear to listen when we needed it the most. We would have been lost without it, so thank you all from the bottom of our hearts.

SCID is one of the most serious primary immunodeficiency disorders. The defining characteristic of SCID is the absence of T-cells and as a result lack of B-cell function (the specialized white blood cells made in the bone marrow to fight infection) so in simple terms Luka has NO T-cells which mean's his immune system does not work at all. Luka is susceptible to serious illness by bacteria, viruses and fungi that would not normally cause illness in a person with a normal immune system SCID is a very rare disease it is estimated to occur in approximately 1 out 50,000 to 100,000 births.