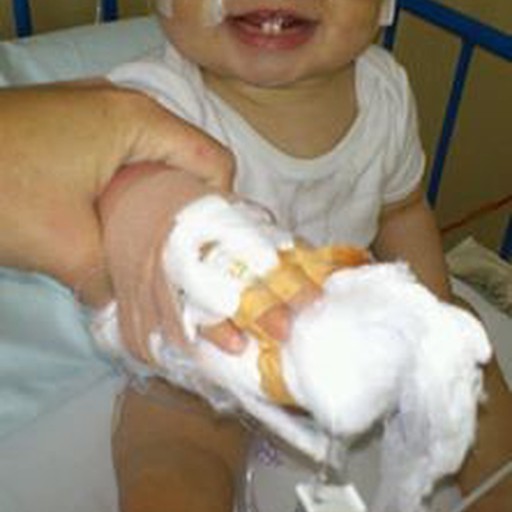 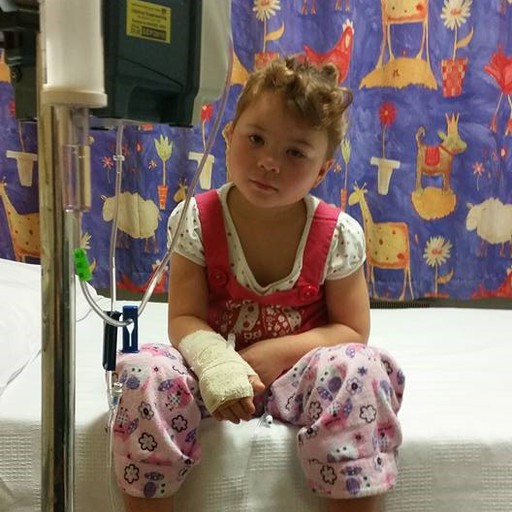 After months of the warning signs of failure to thrive, multiple and recurring infections and repeated trips to the hospital, Amber Comer was finally diagnosed with a Primary Immune Deficiency. She is symptomatic of C2 deficiency, which means she cannot fight encapsulated bacteria. These are the bugs that bring on sepsis, meningitis and skin infections. Bacterial ear infections, staph, strep, Hib, meningococcal, etc. This is her story as told by her mother, Jodi Wrightson.

Induced at 38 weeks’ gestation due to small growth. She was born 5lb 9oz in December 2010. During Amber’s first four months of life, she was diagnosed with prolonged jaundice. At 5.5 months of age, one morning about 10am Amber started to scream a high-pitched scream out of nowhere. No pre illness, no signs of anything wrong prior. Her breathing got rapid, she had the sweats, and she refused her bottles. We did what any other parent would: Pamol and observe. A few hours later, after we realised observing and Pamol was not helping, we decided to get her in to the local medical centre. The local doctor, being rural, was out on a call at that time, so we had to wait for a call to bring her in. At 2pm that day we had the call and arrived at the medical centre to have them call an ambulance, which shipped us off to our local base hospital. Amber’s heart rate was up, temperature, and breath rate, along with her inconsolable crying, and lack of interest in food showed she was not a well little girl. She went through numerous tests and we finally learnt our girl had bacteraemia plus bacterial pneumonia and pleurisy (streptococcus). In the 2-week admission with many other tests, more IV lines as they didn’t hold well, antibiotics, more x-rays and care, she was not getting much better. We were braced for the possibility of an air-lift to Starship for a chest drain. We were extremely lucky that we dodged this, with only sheer luck and her white-blood count dropping a bit where our doctors were willing to watch and wait and continue doing what we were all doing. Two weeks later Amber was discharged and sent home on oral antibiotics. However, approximately one week after Amber finished her oral antibiotics, as scripted, she became unwell again needing medical attention. This time there was no fever, but a viral chest infection needing inhalers, steroids, and a lot of care and love. This went on for 6 weeks. Not long after that, there were ear infections, croup, bronchitis, one after the other. She never really got a break from illnesses or needing medical attention for one thing or another. Antibiotic scripts were frequent in the months after this.

One evening in early December 2011 at 11.5 months old Amber went to bed like a usual child, after her meal, bath, and bedtime story. Happy, and healthy. If only we knew what was to come. At 10pm Amber woke with a high-pitched scream. We went in to check on her, made sure all was well with her and her surroundings like any other parent, before popping her back down to sleep. An hour later she woke again, this time with a high-pitched scream accompanied by vomiting. Our first reaction was “oh no, we have a tummy bug.” Why would it be anything else? Over the night, she became sleepier, vomiting in between naps on me, curled up on the chair in the lounge. By 4am we rang Health Line. They told us she would need to be seen by a doctor. So at 7am I showered and got stuff ready, while she slept on the bed.

As soon as the GP opened we were in the door. This is when my world started to spin. The doctor did her checks, and then clear as day I remember her saying “have you got your car? She needs the hospital, you will be quicker than an ambulance, I think your child may have meningitis.” The doctor and nurse got her prepped for the trip by giving her an intramuscular injection of antibiotics in her thigh while I rang my partner to let him know what was happening. They rang ahead and the hospital was waiting for us to arrive. My heart racing, we set off to the local hospital 85km away. I have never driven so fast (yet within the speed limit) as on this day. My heart was racing, adrenalin was pumping and I had the words of “possible meningitis” echoing through my mind the whole trip. I kept checking on her and it was the scariest drive I have ever made, knowing I was alone with a child so sick in the back, yet it was the fastest way to get her medical attention.

We arrived at the base hospital and were taken through and seen immediately. Amber had developed a petechial rash on her face, on the trip over. This was when once again blood tests, IV lines, x-rays, and urine bags were done, along with a lumber puncture. She was so unwell she just lay there for them, while they stuck a needle in her back. My heart broke. My baby! How can you not complain of such a thing? I sat in the isolation room waiting on my own, my partner at work, our other children at school, hoping, praying, wondering. When the paediatric consultant who did the lumbar puncture walked in, sat on my bed, and said, “you have a very sick little girl, she has meningitis.“ I broke, like any other parent would. Emotions ran wild, shock overcame me. The lumber puncture confirmed Amber indeed had BACTERIAL MENINGITIS (Hib E) plus bacteraemia. A nasty infection that does indeed take life most of the time. Antibiotics were started and we were placed in an isolation room. IV lines were being replaced time and again, and with a lot of treatment needed it was decided a PICC line was the best way to go. While Amber was under general anaesthetic getting her PICC line to help with antibiotic treatment for meningitis, one of her lungs collapsed. Amber ended up in ICU for 24 hours with the diagnoses of bacterial meningitis, secondary bronchitis, and a collapsed lung. It was a traumatic experience for us to witness and watch our child fight through. Yet through it all, when she could, she would always smile, as if to reassure us.

Two weeks in hospital, and Amber celebrated her first birthday on the ward. What a trooper to make her first birthday! Celebrations were held in the ward. We sure had life to celebrate. We were discharged just over two weeks later.  We went home four days before Christmas 2011 and saw in the new year. Finally, it was over… or was it? You wouldn’t believe how amazing it was having our whole family home and living. We cherished every moment.

Two weeks later, in early to mid-January, once again Amber out of nowhere got a temperature. She went off her food, and I did not hesitate getting her medical attention. I was not taking any risks. We took her to the after-hours clinic, where they observed her for a few hours. It was decided she was on the decline, and an ambulance was called yet again. When at the hospital she was sleepy with a temperature, heart rate elevated, fast breathing and off her formula and food. Once again, all the tests under the sun were done, including another lumber puncture. This time it was confirmed septicaemia (blood poisoning) of a different bacterial bug.

Three times in her short year of life, she had fought three life-threatening illnesses. Why? This was the question the doctors were asking also. Once treatment was underway we were taken to Starship via ambulance where, for five days her treatment continued. She underwent MRIs, ultrasounds, and many other tests. We saw doctors, immunologists, infectious diseases consultants, all with different ideas and thoughts on what may be going on. There were different medical terms talked about from all different directions. Blood work, oh the blood work. Needles we stopped counting when we were in the high hundreds, yet she was only 13 months old.

Finally, we were transported back to our base hospital where we completed treatment, and she was discharged home. From that moment, we went into isolation. For each time we took Amber out into the community, she would succumb to something. It was no longer a risk we could take. We used hand-sanitizer, face-masks, and reduced contact with the outside world. Our only venture into the outside world was to attended medical appointments. We lost many friends, along the way; this path is not easily comprehendible. Working was no longer an option for me. My partner juggling everyday living as a dairy farmer trying to make ends meet and provide for our family, along with our other two children, who were walking this path with us. It was never nice to say “I’m sorry, but XXXX can’t come over to play“ or “I am sorry I cannot watch your races or attend things at school that I am extremely proud of, due to the high risk that goes with it.“ It broke our hearts; we were doing the best we could with the situation that was handed to us.

Amber would still get sick, as she had siblings out in the community; we juggled life as well as we could. Many admissions meant dropping things out of nowhere and heading off to the hospital. Children rising from a night’s sleep, or getting home from school, to be greeted by Dad, as once again Mum has had to run Amber in to be seen, or treated.

At the age of 18 months old, our immunologist put her on prophylactic antibiotics daily, to help keep the bugs at bay. We got a new vaccine schedule, with specialised vaccines to try and help build up some sort of immunity. At age two, once Amber was within her immunisation schedule, we started to venture out. One trip out would mean hand-sanitizers, and to an outdoor activity, where not many other children were playing or people were around. She was two years of age before she played on her first playground. For 48 hrs afterwards, I sat, fretting and waiting, for what may arise. Slowly but surely, we were able to venture out more, and although there were times we did end up back in hospital, we have much shorter admissions. Who would have thought a childhood fever sometimes can’t be observed and treated with Pamol on the couch? We have learnt that we need to move fast, getting her help at the first sign of illness and getting her treatment, as this could mean life or death. With the help of the special schedule immunisations, the prophylactic antibiotics daily, and our personal house rules, we started to do a few things as a family, friends could come and play again, and we could go on family outings.

Amber was diagnosed with C2 deficiency, which means her body can’t fight bacteria; the bugs that bring on sepsis, meningitis and skin infections or bacterial ear infections, staph, strep, Hib, meningococcal, etc. This will be a life-long juggle for her, and our family. However, with having a great medical team from Starship and our local base hospital, getting her seen with any sign of illness, not delaying treatment if presenting unwell, keeping up her prophylaxis, special vaccines, working with her medical teams and educating others that may come her way, keeping her away from sick people, and having understanding that things are a little different and her body cannot fight bugs like you or I, Amber can live a more normal life. She sure knows what life is all about and what it means to smile.