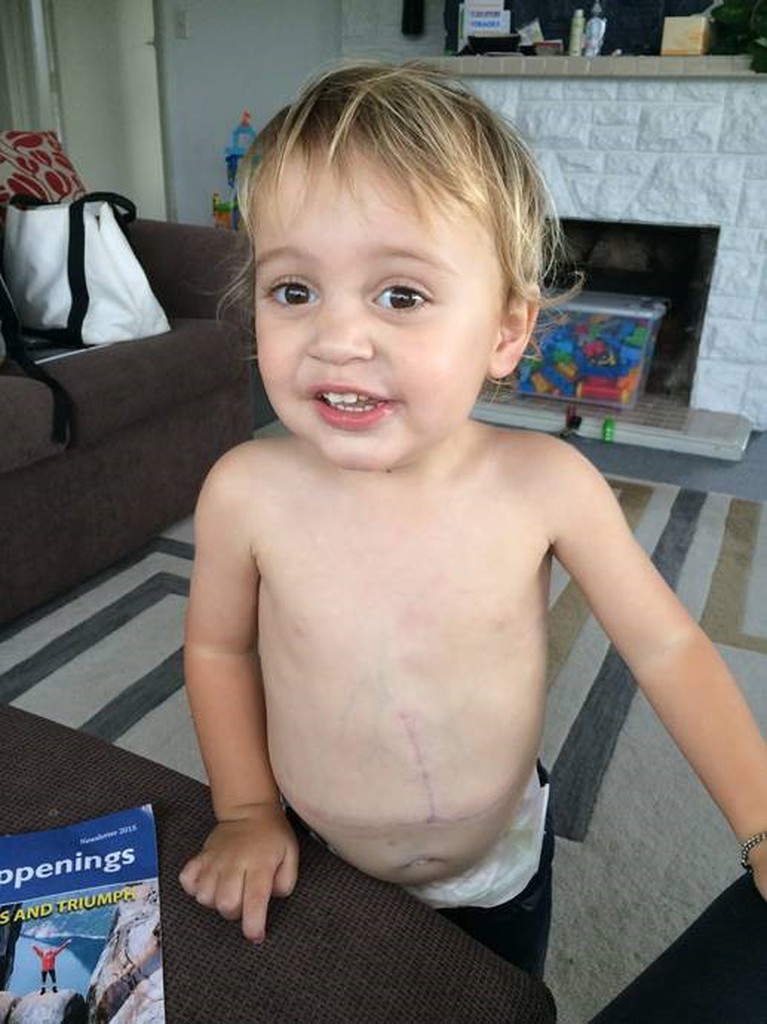 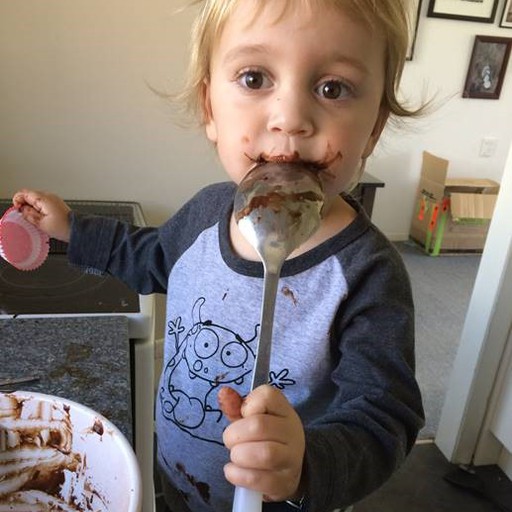 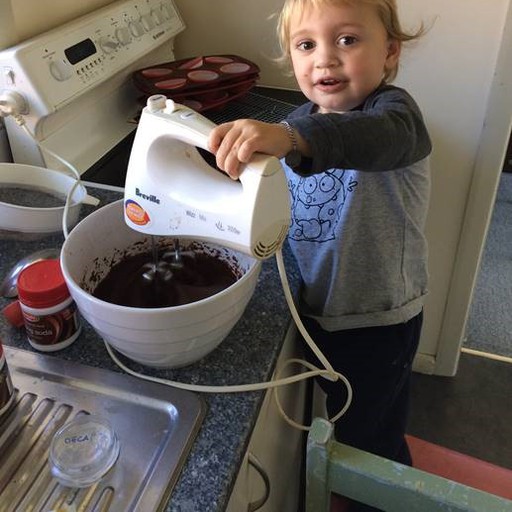 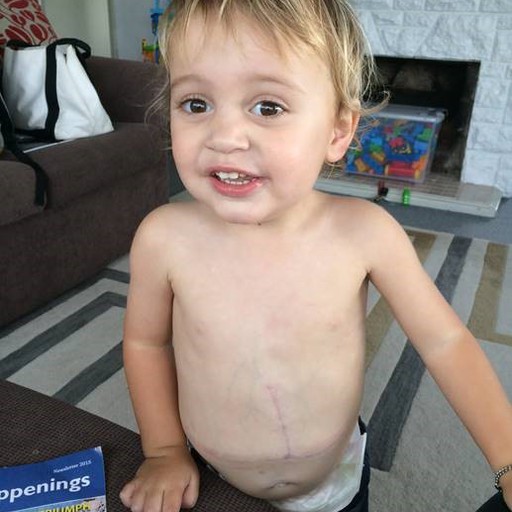 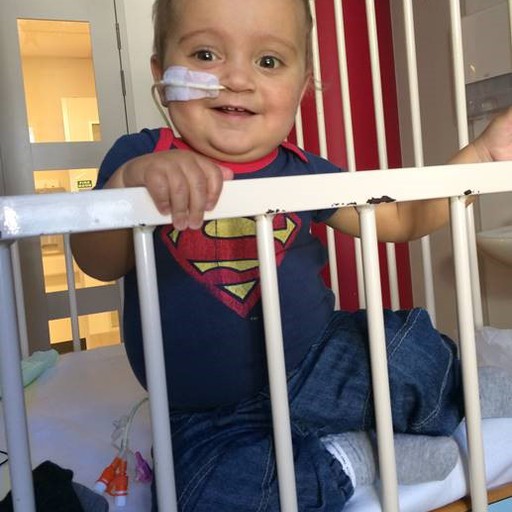 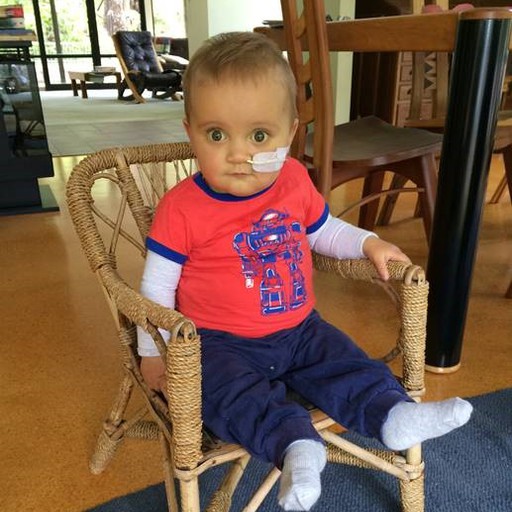 After a near perfect pregnancy, our wee man decided to wedge himself very firmly with both feet down. “Well,” we thought, “If that’s the worst, we can deal with it,” and duly noted the date for C-Section in our diaries. Little did we know…

He arrived safely on the selected date; APGAR was great, heel prick showed no notifications, and I presented him to our GP at six weeks for his first check and immunisations. “He’s a bit jaundiced” she said. “Really? I thought it was just some of his dad’s colouring making an appearance,” I responded. 30 mins later I held my boy as he had his first of many blood tests trying to reassure myself that nothing was wrong. Later that afternoon our GP phoned, “Something’s not quite right with his bilirubin levels and we need to check it, can you bring him in again tomorrow along with a dirty nappy?” Fast forward 2 hours and our world as we knew it started to disappear.

Slade had a bad reaction to his first set of immunisation’s and after speaking to Healthline and mentioning the high bilirubin levels, they advised us to go to an after-hours clinic who, after reviewing Slade, fired us up to Waikato Hospital Paediatric A&E. At A&E they tried and tried to get a venous sample and threw words around that we didn’t understand. At 1 am and still with no luck getting a blood sample, I told them we were leaving. They tried their best to stop us but we signed the forms, promised to be back at 8am, and went home exhausted.

8 am we were back. A different doctor, a more thorough explanation, a blood sample: no problems, before a wait for ultrasound and results. (Adam was still thinking that Slade had something on a par with having a cold) After being transferred to the ward we were met by a consultant who told us that Slade had all the signs of Biliary Atresia and that he would need a liver biopsy and operation as soon as possible. He had spoken to Starship and we were expected there at 7pm that evening. I only remember asking one question, “This operation, will it fix it?” and got the reply “No, he’ll need a liver transplant.” The rest of the day was a blur: packing up our things, calling family and employers and then the car journey. I remember sitting by my husband as he said, “How bout we just keep driving?” We didn’t though and arrived bewildered at Starship, new to hospitals and their routines.

Slade was 7 weeks old when he had his Kasai. My husband and I lay on the bed at Ronald MacDonald House holding hands and a tiny sock for the four hours it took, unable to do anything else. It was my first night away from our little boy. He recovered well and we hoped he was one of the 60% for whom the operation worked well. Unfortunately, that was not the case, and by the time he was 5 months old we knew it had failed. The Starship consultants started talking transplant and all I could think was that it was too soon, he was too little. But we knew it was our only option. The size of his tummy was limiting his movement, he was on 13 medications, was tube and breast fed but losing his appetite fast, and had to be continuously fed overnight. He suffered bad reflux, vomiting, and was yellow and itchy from the jaundice. Despite this and everything else, he remained the most chilled out happy little guy.

At eight months old Slade was assessed for a transplant and placed on the transplant list. His dad, Adam, was the first to be assessed as a possible live donor. 5 weeks later we got the incredible but frightening news that he was a match and that the operation was booked for 12 days’ time. In November 2014 when Slade was 10 months old, he received a piece of his Dad’s liver.

He didn’t like PICU, he kept trying to climb out of the bed and so was woken up and transferred to the ward barely 20 hours after the transplant. Day two he was fully awake and chatty, day three he was sitting up. He made a wonderful recovery, as did his dad (with the exception of a very bad Tramadol reaction). It was hard having the two most important people in my life so sick and in two different places but Adam was certain, “Stay with our boy, then I know he’ll be ok,” and thanks to the wonderful support of his sister I was able to do that. They talked about discharge after only a week but fortunately they couldn’t get all the bits and pieces done. Day eight, Slade was unwell and no one was sure why. Day nine and he was worse. Distended belly, the jaundice had returned, he was unsettled, not eating and so the tests started. Ultrasounds, x-rays and blood tests among others to try and figure out what was going on. Was it a bug or something to do with the surgery? First they thought it was a cold virus, then a gastro bug. By Saturday, day 10, the surgeon told us he wanted an MRI done but they couldn’t risk sedating him. Slade was so sick he just lay there while I stroked his head.

There was fluid in his tummy that hadn’t been seen before. The surgeon said he was going to operate to see what was going on. They put a needle into the cavity and drew out infected bile, there was a leak somewhere so they put in two drains. Slade was kept under in PICU while they prepped a radiology theatre at Auckland Hospital to try and get a PTC (Percutaneous transhepatic cholangiogram) inserted to support the draining of bile from his liver. Because of the shocking state of his bile ducts, it didn’t work and the hope was that he would remain stable until Monday when they could try again. The drains failed that night and he was taken back to theatre the following day (Sunday) to open him up completely to clean and flush out the stomach cavity. It was while they were doing this that they found the bile duct leading from the liver into the intestines had completely detached so was draining straight into his stomach cavity. Luckily and surprisingly the tissue was in good order and was able to be re-joined and after the clean out he became a lot more stable.

Monday was day three in theatre but the PTC went in fine and he was back with us quickly. Finally, things started looking up. He was kept sedated and with a breathing tube for four more days and there were a couple of times that I didn’t think we’d be bringing him home as his little body fought the infections and started healing. By Saturday he was fully awake and breathing with oxygen and late Sunday night he was moved back to the ward.

I can’t remember how long we stayed on the ward but it didn’t take long before we were living as a family at Ronald MacDonald House in one of their amazing transplant apartments. Being back together on our own terms (sort of) was great for the soul. We had a family Christmas there and started hoping that we would make it home soon. We got the go ahead to leave for home in early February and it was daunting leaving the security of Starship and the Ronald MacDonald House families to do things completely by ourselves. Of course we weren’t as we had wonderful support from the homecare team from Waikato Hospital who had been with us on our journey since Slade was diagnosed.

6 Months to the day after Slade’s transplant, I was back at Starship for a routine PTC change when the new one got snagged on the bed and was damaged. Luckily this one was meant to be the last and they made the call to remove it and see how things went. It was fine. Finally, after having the first tube of one sort or another inserted at three months old, he lost them all and we got to see his wee face without something out his nose for the first time. He was pretty chuffed as were we.

As horrible as this experience was, there are so many things to be thankful for in our story. We are so fortunate to have a great GP who picked up that something wasn’t right when he was just 6 weeks old. We are so fortunate to have the team of specialists in New Zealand working in this field and supported so well by their nurse specialists and the teams in regional hospitals. I remember getting home and sitting with one of our home care nurses and finally having the guts to ask how bad it really had been and having her reply with tears roll down her face, “It was bad, really bad. I wasn’t sure we were going to get him to transplant in time.” We were so fortunate that Slade’s dad was a match, that he was the first one tested and that we got to surgery so quickly and I know there are others who were not so lucky. We were fortunate to have the support of Janet at KIDS foundation, ADHB social workers, plus others.  The whole thing was rubbish, but I look at Slade now, say a silent thank you and try to keep up

Slade is now 7 years old, attending school and enjoying a full and active life. Slade and his family have shared their journey through liver transplant with a children's book published by IDFNZ, to assist others starting off on a similar path. The book is available free of cost, from the IDFNZ support office and has been printed in English, Maori, Samoan, Chinese and Tongan languages.﻿

﻿Thank you for sharing such a powerful story!